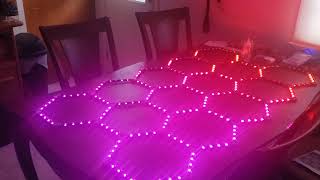 I’ll be straight forward in answering that question. There, are, however, a few answers to this. Answer 1 A lot changed in the past 90 days. First, the big news: we’re expecting a new family member, due December of this year. That’s right, Kelly is pregnant, and so I get to become a dad, again… […]

About two years ago, while I was still working at my prior employer, a co-worker of mine and I were discussing hot tea. I have been a tea drinker most of my life. I usually have had to watch it in the past few years as hot tea would make me sleepy more than anything […]

If you prefer, you can skip my long-winded intro by clicking here. This actually was something I did a couple weeks ago, and while I called it a Kitchen Activity, this was really done on the grill outside. Nevertheless, I felt it was appropriate to share this pair of recipes because their may be people […]

OK, I’m not sure if hydroponically is actually a word, but given that I’m not getting a spelling error from a proofreading application, I’m guessing it is. So to start off, I will state that I am no green thumb. I mean, I have successfully grown plants in the past. When I was younger (maybe […]

This was less of an experiment for me and more of one for my daughter. Caidi made white bread with me today. It’s my second time with this recipe and only the 4th time ever that I’ve made a yeast recipe and not had a failure. I credit the Instant Yeast (something my mom introduced […]

It’s been a number of years since I first found and tried Calypso Lemonade. The first time I encountered it was at one of those gas-station / convenience store hybrids that dot the landscape of Buffalo nearly as much as the average Tim Horton’s donuts. By my very nature, I prefer cool drinks to warm […]

If you’ve ever been to Red Robin, you might have noticed one of their appetizers is a serving of fried pickle chips. Now, I’ll be honest that sometimes I think fried recipes can sound a bit bizarre. Fried Twinkies, Fried Oreos, Fried Cheese Curds… they sound a bit bizarre at times. Fried pickles were another […]

My most recent experiment definitely toes the line on not being the most healthy, but this isn’t an everyday sort of recipe for me, so I don’t feel bad having made it. The recipe: Apple Fritters. I actually found this recipe as a result of the suggested links on YouTube. The recipe is different (according […]

After last week’s success with the freckled lemonade, I decided to play with the recipe a bit to get a plain lemonade that does NOT require you to actually juice lemons. The upshot to this is that the recipe can be made in as little as 10 minutes. The problem with that other recipe (problem […]

Technically not my first successful experiment in cooking / baking / etc… not by a long shot… but this is the first one I’m documenting on here. I don’t have a bunch of pictures or anything, but hopefully this will serve as a decent springboard of content. So I have a major addiction to freckled […]