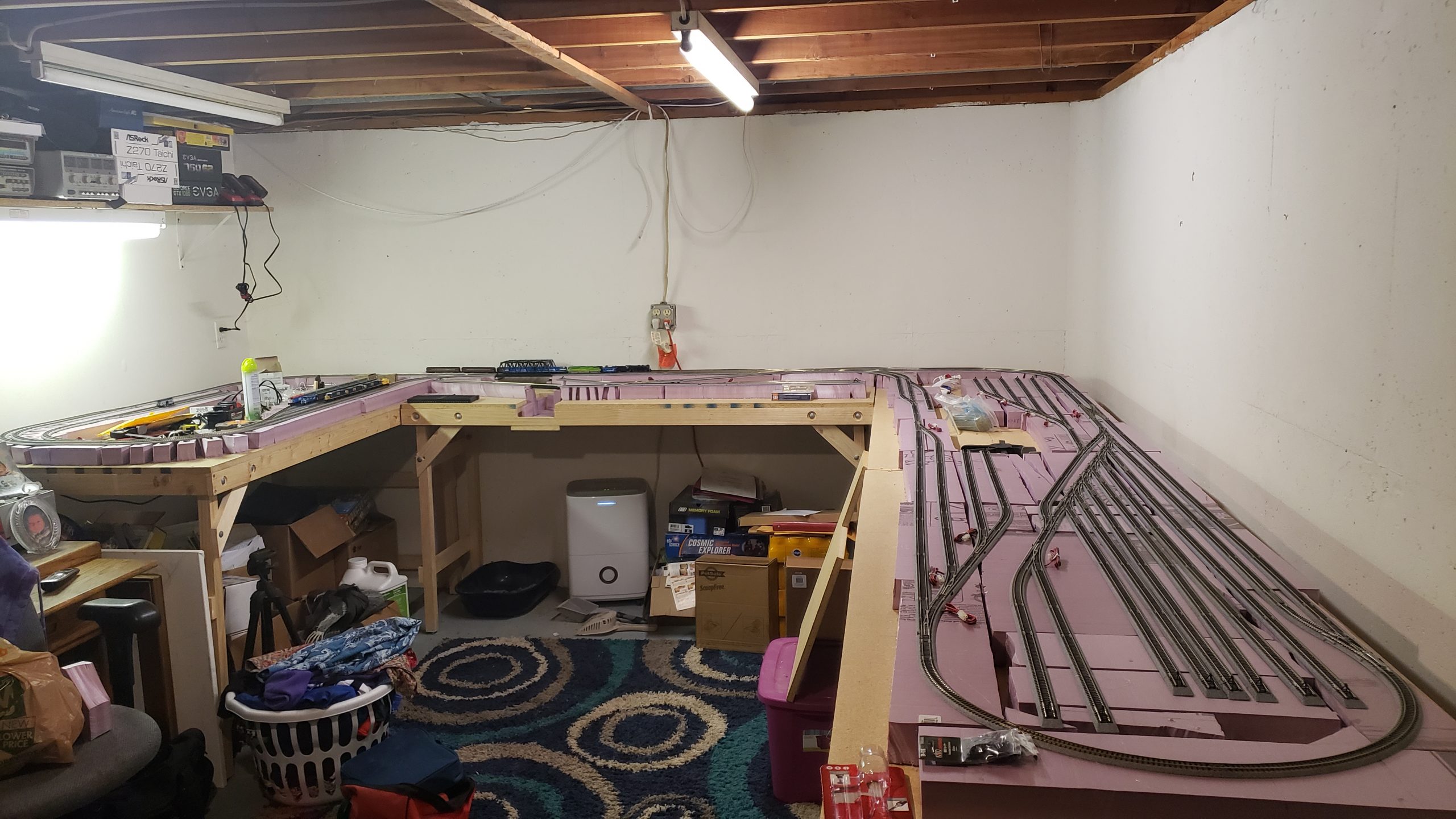 OK, I wrote that title before I really thought about the content of this article. So that was not an intentional pun. At any rate, I am slowly getting back to work on the layout. I say slowly because I literally have spent no more than an hour on the project on any given week. With the exception of the week-and-a-half of vacation I took at the end of December. Then I might have managed a whopping 8 hours of work. So much for a productive vacation.

But I supposed I should be at least somewhat happy. I managed to get new foam in place on the layout, and it seems like it’s going to help a bit. I also changed the track plan a bit. One of the things I realized after all the effort I made so far is that having a yard crossing two tables made for a pain in the neck in case we ever move. So I sat down with my track plan and made some modifications. I removed the original yard and redid the layout to have only a single passenger station.

The upshot to this is, well, multi-fold. First, I moved my table out a bit from it’s original position. That’s not so much a track, plan thing… at least, not on its own.

Second, I don’t have any turnouts now on a table joint. At least one if not two of the turnouts for the yard would have had to be removed on the old track plan, and I really just did NOT want to deal with that. So that’s been eliminated.

Third, I expanded the station on one side of the board and eliminated the second station. This is going to give me a longer station area. It does cross a seam, but that won’t be an issue because of another part of the changes. The benefit to the longer station is a benefit because I already have two passenger trains that exceeded the length of the old station areas, and there’s another set I am still aiming for (at least one) that I would like to add to my collection. All of these sets have at least 8 cars plus locomotive, so they wouldn’t have fit into any of the station spots.

Fourth, as a connection to number 3 and 2, I decided to use the Kato expander tracks where the table joints are. These nifty pieces of track can be popped in and expanded to meet with the sections across tables, and popped out should I need to move the tables for any reason (scenery, wiring, or if we outright move). That’s a huge relief. I can get all of the rest of the track secured to the tables and only have those little pieces to temporarily remove. Win for me.

Fifth, was a moment of realization that hit me at about 3 in the morning a few weeks back. Here I was, thinking ,”Great, I have a bunch of turnouts and bumpers leftover and I gave up having a yard. That’s not really what I wanted to do.” But of course, yards take up space, and I just was out of it at this point. And that’s when I remembered a few articles / books / project layouts I saw on other sides, including Model Railroader. A staging yard.

I mean, let’s face it. I’m not going for perfect prototype operation here. I just want to run my trains. But to give it an element of realism, I could put a staging yard somewhere and that would have trains that come “into and out of town”. My first option was to think of a way to place the yard either above or below the table. Then I had an even better idea. I’ve moved those tables about 3 and a half, maybe almost 4 feet out from the one wall. That’s plenty of space for me to walk around behind the table. I only need a table 1 foot wide to use those turnouts to make a staging yard. And the area back there is 12 feet long. The layout itself is eleven-and-a-half feet wide, so it would be easy to accommodate an area up to that long.

The end result was a design for a 1 foot wide by 8 foot long “shelf” that will bolt onto the back of the table that will contain a staging yard with several tracks that can hold pretty much anything I want to. If we move and I have more space, I can either leave it as an a “distant destination” or I can remove it and reuse all of the track on that part of the layout to build a yard that is visible on the front of the layout. The nice thing is, this ties back into the fourth benefit. The track that leads to this section of the yard is another one of those expander tracks. And that segment will lead into a hole cut into the scenery backer I will be putting up. I can decorate the area to make it seem like a tunnel or something like that. And that ties back to the first item. Moving out the table gave me new options. So over the next month or so, I will make the shelf (weather permitting), bolt it onto the back of the layout, set up the backer boards, and wire things up. If everything goes reasonably well, I can be running trains again soon.

So that’s the status on the WSVRR. It was the better part of a year of not being able to do much, but at least there’s new progress, and hopefully some new footage and media of the layout. Hopefully, this time, with smoother operations. Check back soon for updates.